We’re proud to announce that Eleanor is the cover photographer for the next issue of Thanet’s award-winning Isle magazine. It’s a simple photograph taken of a striped beach hut – a constant feature in the Kiddie Corner on Margate beach every summer. But we like to think that it’s eye-catching enough to grab people’s attention from the coffee tables around Thanet; while also being a much-loved representation of the spring and summer season.

Funnily enough, the beach hut has been replaced since the photo was taken, with a new very similar version, but not quite the same….. We were just wondering if the old one had been consigned to the beach in the sky when we happened to bump into a previous owner, Terry of Margate’s HunkyDory-24 vintage shop, who filled us in on its history and whereabouts.

“My cousins, Austin and Adam, run the kiddies’ Corner and deckchair hire business. When they replaced the two huts they offered me the old ones, so they ended up in my garden.  Unfortunately when I moved house I had no space for them, so the huts came with the property.”

Apparently the house was bought by folks from London. We hope the new owners appreciate that they have inherited a piece of Margate history. Terry tells us he made some changes, such as adding some little windows. We like to think that the one pictured is still in use today, and has been transformed into a garden bar or cool wendy house maybe? Can anyone fill us in?

For Margate residents, the arrival of the beach huts and the kiddie’s corner is the first sign of the new summer season’s imminent arrival, while their removal is met with a collective sigh that winter is on its way. Terry informed us that the set-up date is always a bit of a gamble, as the Council permits them to be in situ for six months exactly. Start the season too early and they could find themselves frustratingly dismantling everything during an Indian summer heatwave! 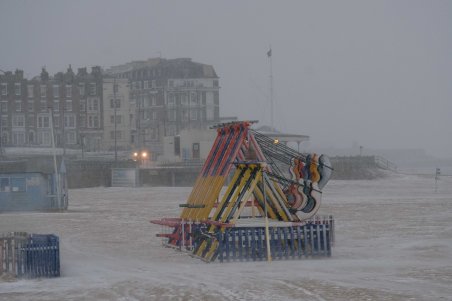 So, after the recent surreal sight of Kiddie’s Corner and the beach huts in the snow, here’s hoping for everyone that a scorcher of a summer is just around the corner!

The new addition of Isle magazine is out on Thursday 22 March and can be picked up for free around Thanet. We’re also holding a launch party at Vortigern gallery in Margate where copies will be available, hot off the press! If you’d like to attend please get in touch for an invitation.